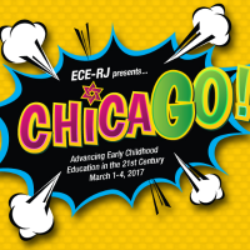 More than 250 directors, teachers, and leaders involved in early education and engagement from North America and Israel attended the conference, which focused on the theme, Advancing Early Childhood Education in the 21st Century.

Rabbi Rick Jacobs, President of the Union for Reform Judaism, spoke to attendees about the priority the Reform Movement places on early engagement, and provoked a ground-swell of inspiration in recognizing early educators as the experts in engaging families with young children. He said, “You are the ones who usher the next generation into our doors. You create the connections, and the future is bright because of your capable hands”.  Keynote speaker Diana Mendley Rauner, President of the Ounce of Prevention Fund (a public-private partnership that prepares children for success in school and in life), described the Fund’s efforts in early education, working to unlock the power of human potential and to advance program and policy efforts interactively to foster systemic change.

ECE-RJ made a $125 donation made to the  LOCAL CHICAGO AREA: Ounce of Prevention Fund – http://www.theounce.org Since 1982, the Ounce of Prevention Fund has persistently pursued a single goal: that all American children—particularly those born into poverty—have quality early childhood experiences in the crucial first five years of life. Last year, more than 4,000 children and families are directly serviced through birth-to-five programs and almost 3,000 early childhood professionals received training. In addition, The Ounce advocates for state and federal funding for early childhood services that reach hundreds of thousands of children across the country.

The organization also made a $125 donation to the  ISRAEL: JNF Special In Uniform - http://special.org.il/en/special-in-uniform/about/ Special in Uniform is an innovative program that integrates youth with disabilities into the Israel Defense Forces (IDF) and assists in preparing them for careers following army service. Participants are accepted by the IDF to serve as fully fledged soldiers in a unique, specially designed, protective and helpful framework